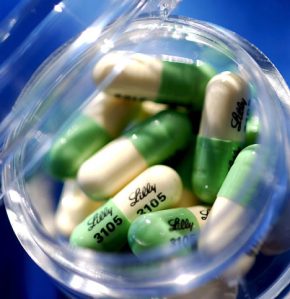 Recently, a study was published in the Journal of the American Medical Association that showed that anti-depressants are no more effective for depression than a sugar pill (a placebo).  In fact, if you take into account the side effects that a person might experience while taking an antidepressant you could say that taking the medication was actually worse than taking nothing at all.  At $4 per pill, that is an expensive way to not treat depression.

There is no doubt that depression is a serious and sometimes debilitating condition.  I have many patients who complain from time to time they feel a little (or a lot) down.  About 9.5% of the American public is affected by some form of depression.  That’s almost 19 million people!  If you’re a pharmaceutical company that is also quite the market for a product.  From a business standpoint, I can understand their desire to push through products that could potentially tap into this.

There are many patients, however, that swear they have gotten help by taking one of several prescription antidepressants available.  They swear up and down that they had no preconceived notions or expectations as to whether the drug was going to work for them.  While this may be true, the participants in the studies also felt the same way because they knew there was a chance they might receive a dummy pill.  Patients who speak to their doctors about depression are looking for treatment.  They are hoping that something can be done to help improve their mood.  Whether they expect the medication to work for them is irrelevant.  The very fact that they seek treatment makes the placebo effect a very real possibility, despite their rationalizations.  Hope is not rational.

The next argument for antidepressants (an all drugs for that matter) is that the FDA would not approve a drug that doesn’t work or isn’t safe.  Consider what it takes for a drug to get approved.  It is not as difficult as it may seem.

The FDA requires two well-designed clinical trials showing a drug is more effective than a placebo. That’s two, period—even if many more studies show no such effectiveness. And the size of the “more effective” doesn’t much matter, as long as it is statistically significant. (From Newsweek)

Yes, you read that correctly.  A drug may have 10 studies that shows it is ineffective and just 2 that shows it works and it will get approved.  I wonder if the pharmaceutical industry had anything to do with “helping” write those requirements?

People want to believe that these drugs are helpful.  They scoff, “If these antidepressants are not better than placebo, then how come I have heard this before?” Consider the power and reach of the pharmaceutical industry.  Antidepressants are a $9.6 billion dollar industry.  They’ve got money and power to suppress people a research that may be unfavorable.  The story of psychology researcher Irving Kirsch is a good example.

The boy who said the emperor had no clothes didn’t endear himself to his fellow subjects, and Kirsch has fared little better. A nascent collaboration with a scientist at a medical school ended in 2002 when the scientist was warned not to submit a grant proposal with Kirsch if he ever wanted to be funded again. Four years later, another scientist wrote a paper questioning the effectiveness of antidepressants, citing Kirsch’s work. It was published in a prestigious journal. That ordinarily brings accolades. Instead, his department chair dressed him down and warned him not to become too involved with Kirsch. (From Newsweek)

These stories abound in research when it is unfavorable to corporate conglomerates like pharmaceutical companies.  They fund research, but not so they can remove products from the market.  They want more product.  Anything that is unfavorable is frowned upon and researchers who insist on truth are not funded.

So the next question I get is, “Then what am I supposed to do about my depression.” Do anything.  That’s right, anything other than antidepressants.  The placebo effect improves mood because the person thinks they are doing something to improve it.  And who cares?  If you decide you want to stand on your head and sing happy birthday and it improves your mood, the end result is achieved.  Placebo effect or not, you feel better.  There are things, however, that I recommend to my depressed patients to help them out of their depression.

There are many effective ways to manage depression without resorting to pharmaceutical agents which can often result in side effects that are just as bad or worse than the symptoms of depression.  The research is pretty convincing that they are not very effective.  Don’t buy into the hype.  Just because it’s on TV doesn’t mean it’s true.