My Take on “Health Care” Reform…

In light of the recent health reform bill that passed the legislative branch of the government and that President Obama has signed into law today, I thought I would take a closer look and see who will actually benefit from this historic piece of legislation.

This health reform does little to change the actual problems with health care in the United States.  This bill will not make us any healthier.  It may insure more people, but having health insurance does not make you healthy.  As a matter of fact, one could argue that people without health insurance are the ones who watch their health more closely so they can avoid the large doctors bills that might accrue should something happen.

The reason Americans are so unhealthy has nothing to do with insurance coverage.  It has everything to do with lifestyle choices.  You can’t drive through many towns in the country and not see at least 3 or 4 different fast food chain restaurants.  They provide a service that people love – quick, easy good tasting meals.  Some argue that they actually taste good, but you can’t argue with results.  Check out these numbers:

McDonald’s claims to have served over 99 billion people.  It’s right on their signs.  Some have changed to say “billions and billions served” to reflect the even higher numbers suggesting it is now too high to count.  I tend to agree, it is probably too high to count.  But let’s take the 99 billion as our number.  We can safely assume the number is at least that high in the United States alone because we are “rounding down” to put it plainly.  If we consider that McDonald’s started in 1948 with the process we would recognize as fast food, that means they’ve served 4,374,723 meals per day to reach 99 billion served in the last 62 years. No wonder America has a health problem.  This just McDonald’s.  This doesn’t take into account Pizza Hut, Burger King, Wendy’s, Jack in the Box, Taco Bell, KFC or any other fast food chain!

It is clear that our problems go far beyond a lack of health insurance coverage in this country.  Another part of the problem is our thought process when it comes to health and being sick.  When most people get sick (or have an ache or pain, etc…) their first thought is, “What pill can I take to get better.”  There’s nothing wrong with taking an antibiotic if you have a raging bacterial infection or taking a life saving drug if it indeed is life saving.  These cases, however, are the vast minority of cases!  Drugs are over prescribed and the benefits over sold while natural and more cost effective treatments are available. They aren’t marketed like pharmaceuticals and aren’t patentable like pharmaceuticals so they aren’t recognized as well. 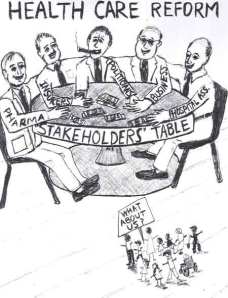 The pharmaceutical lobby had a lot of work ahead of itself when the talk of health care reform began.  They eventually got behind the reform and supported it wholeheartedly.  And now we know why.  They made out like bandits in this reform!

Initially, price control on pharmaceuticals was discussed.  This was a huge point of contention for the pharmaceutical industry.  Once this was eliminated support for the reform bill was gained.  As evidence the industry spent an estimated $100 million in TV advertising, grass-roots organizing and other marketing efforts to promote reform.  Many people will point to the concessions the industry agreed too.  They agreed to contribute $85 billion toward the cost of the bill in the form of industry fees and lower prices paid under government programs over 10 years.  While $85 billion certainly is a lot of money, it pales in comparison to industry revenue.  Take this into consideration – the top 12 pharmaceutical companies had a combined revenue of $237.7 billion in 2006 alone (the most recent year for which I could find statistics)!  When you consider that the $85 billion is spread out over 10 years you realize it really is just a small drop in the bucket for them.  Consider that the hospitals agreed to a much higher number of $155 billion over the next 10 years mainly by accepting lower fees through medicare.

What you must also realize is that the pharmaceutical industry sees this as a way to gain another 32 million costumers.  These are the individuals who are currently uninsured and who do not take prescriptions, see the doctor or get surgery unless they absolutely have to.  Big Pharma sees them as an untapped resource.  No longer will these people leave prescriptions unfilled or forgo their Lipitor because it is too expensive.  The pharmaceutical industry will more than make up for the $85 billion in revenues with sales of more drugs from more insured people. 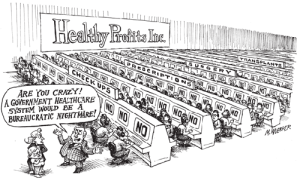 This legislation, while historic and idealistic, will do little to curb the ridiculous health care costs in this country.  This is for two reasons.  First, the bill does nothing to actually change health care.  We are in this situation because we view health and health care backwards.  People get procedures and drugs paid for once they are already sick.  It should be just the opposite.  Pay to prevent illness.  Insurance companies should be paying people to go to the gym and paying for office visits to nutritionists in the same way they pay for an office visit to your primary care.  Secondly, the bill did nothing to change the price of pharmaceuticals.  These prices are artificially inflated and insurance companies still pay it.  This is a huge burden on the finances of this country.

Hopefully I’m wrong and this significantly improves the health care industry in this country, but the major problems were not addressed.  I am sorry to say that in 10 years I think we’ll still be in the same boat.