As it’s a week before the big Turkey Day 2012, I wanted to share our Thanksgiving post from last year. I hadn’t really started posting recipes regularly so some of you may have missed it. Since we will be traveling to Illinois to see my family this year I won’t be cooking, but I hope you give some of these recipes a try as they were fantastic. I’ve left my original content here and added a few new comments (in italics) and pictures to some of the recipes.

This is Dr. Carrie. Dr. Court usually writes these posts but I thought it might be interesting to switch it up. Since tomorrow is Thanksgiving I thought it might be fun to share our menu. Normally, I don’t get the opportunity to cook on the holidays as we usually travel to be with either my family or his, but this year we decided not to go anywhere. As some of you know we eat mostly meat, eggs, vegetables and low glycemic fruit which means we try not to eat a lot of grains, sugar or processed food. I guess you could say we eat a Paleolithic diet which he has posted about in the past (see Why Eat a Paleolithic Diet?). We aren’t strictly Paleo as we do include some dairy in the form of cheese, Greek yogurt, cottage cheese and for me cream in my coffee.

Now, I grew up in a fantastic Midwestern, Standard American Diet family and it is sacrilege to not have pumpkin pie and stuffing to go with your marshmallow sweet potatoes, mashed potatoes and gravy, turkey, cranberry sauce from a can and green bean casserole. So, you can see my conundrum when it comes to preparing my own Thanksgiving dinner. Do I make the traditional dinner and call it a cheat day? But then what do we do with all of those leftovers? I mean we’re only 2 people. Or do I stick to my principles and make a “healthy” meal that’s just meat and veggies and have some fruit for dessert? Boring….that’s what we eat every day! (This year I do plan to make the Brussel Sprouts and Bacon to take to my big family dinner…they’re so good they’ll never suspect it came from a Paleo cookbook!)

I did what every American does…I Googled it! I wanted to see if there were recipes for Paleo versions of traditional Thanksgiving fare. Thanks to the Crossfitters who endorse the Paleo diet there are now tons of recipes online. I was amazed at what I found including an entire Paleo menu. I am not ashamed to admit that I am using most of the recipes from the first website I came across but how could I pass up Mushroom Butter Roasted Turkey, Beef Celery, Walnut and Apple Stuffing, Cranberry Sauce and Pumpkin Pie! If you want to see the complete menu, visit PaleoDiet Lifestyle.

After one click I had most of my menu complete. I still needed a yam recipe. I turned to my favorite Paleo recipe source EverydayPaleo.com. If you receive our email newsletter, you’ve heard me rave about Sarah Fragoso’s book Everyday Paleo. I love her recipes. They are super easy and sooooo tasty! I found a recipe for Paleo Holiday Yams right away. Of course that’s not the only recipe of hers I’m using. I made one from the book called Brussel Sprouts ‘n’ Bacon a few weeks ago and wanted to have it again. I also really wanted to try a recipe she calls “meat candy” aka Sausage Stuffed Dates for an appetizer. (I made these already. I tried to resist but they kept calling my name…they are AMAZING!)

Here is our complete Thanksgiving menu (pics below):

We’ll let you know how it all turns out. So far, so good! The Sausage Stuffed Dates are a winner but I haven’t tried anything else. I have to save something for tomorrow. We have a lot of food to eat so it’s a good thing we’re going to Turkey Torcher at KDR Fitness tomorrow morning. (I’m bummed to miss the Turkey Torcher this year. It was a blast last year and a great way to kick of Thanksgiving Day! I think there are only 2 spots left but you should contact KDR Fitness if you are local and interested in participating.)

Your family might appreciate one of these recipes at your next holiday dinner! I hope you enjoy your Thanksgiving Dinner be it Paleo or Traditional.

In the spirit of the season we are so Thankful for each and every one of our blog readers and patients. Your questions, comments and feedback are always appreciated and welcomed.

I’ve made these little gems a number of time since last Thanksgiving. They’ve become a requested appetizer for get togethers! This was the large version but you can also make a smaller one bite version that’s just as addictive! (Sausage isn’t something that we recommend you eat a lot of as it typically has a lot of preservatives, but it’s fine to have once in a while especially if you buy an organic, preservative free version.)

While the mushrooms on this turkey turned out a little crispy it tasted fantastic! I think I left it uncovered a bit too long.

This stuffing was so good that I’d make it as a meal! I’m glad I revisited this post so that I can do that! The texture is close to regular stuffing but a little different. Now in my family they usually make dressing, so the texture is quite different from that but it has all the right flavors!

These were yummy and reminded me of traditional holiday yams. With on a 1/4 cup of maple syrup they were sweet! You could probably just drizzle a little on there or leave it off entirely if you wanted. 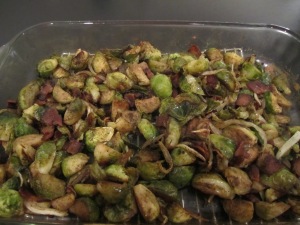 I’ve also made these a number of times since last year! They’re tasty! I’m making them for my family for Thanksgiving this year.

(P.S. I’m also making my family Paleo Breakfast Bread and Chunky Apple Muffins to have at my baby shower…don’t tell! I don’t think they ever know they taste so good!)

Some how I forgot to take a picture of the cranberry sauce. It was good but of all the things I made last year I would tweak this recipe a bit. It was really tart. I would maybe take the maple syrup out of the yams and add it to the Cranberry Sauce.

Oh, now this was a hard one. I love pumpkin pie! My family loves my pumpkin pies and my grandfather used to request my pumpkin pies at Thanksgiving. Now that’s a big deal because my grandmother was an amazing cook! So, when it came to pumpkin pie it was hard to decide if I’d try something new or stick to the traditional. I ended up trying something new and was not disappointed! It was really good. It’s a little different but all the flavor that I love was there!

I encourage you to give one or all of these recipes a try for your Thanksgiving Dinner next week.  I think you and your family will be pleasantly surprised at how delicious they are and how great you feel when you’re not loaded down with all that bread and sugar. I know we felt great last year!