This is a post from the Time wellness blog.  There is a link to it below the article.  Health insurance companies should not own stock in fast food restaurants.  It’s a total conflict of interest. 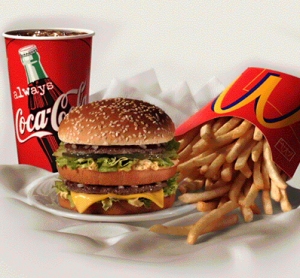 McDonald's and other fast food chains get support from, who else, health insurance companies.

Health insurance companies in the U.S., Canada and Europe hold nearly $1.9 billion in fast-food company stock, according to a new study from researchers at Harvard Medical School and the department of medicine at Cambridge Health Alliance. In the study, published this week in the American Journal of Public Health researchers examined major insurance companies’ stock holdings with five leading, publicly traded fast food chains: McDonald’s, Burger King, Jack in the Box, Yum! Brands (which owns KFC, Taco Bell, and others), and the Wendy’s/Arby’s Group. They found that, as of June 11, 2009, major health insurers owned $1.88 billion in fast-food stock, representing 2.2% of the companies’ total public holdings.

The study authors argue that these findings show a disconcerting disregard among insurance companies for the a growing understanding of how the fast food industry is “increasingly understood to negatively impact public health.” Though they concede that fast food products can of course be consumed responsibly, the researchers emphasize that “the marketing and sale of products by fast food companies is done in a manner that undermines the public health,” and that having the very organizations that provide health insurance support these fast-food chains indicates corporate irresponsibility. As study author Dr. J. Wesley Boyd told the Wall Street Journal health blog:

“They’re profiting directly off the people who eat fast food, and if that leads to obesity or cardiovascular disease, they’ll charge you more for premiums if you have some of those conditions… They’re making money in either case.”

Health insurers should be “held to a higher standard” Boyd and colleagues argue before presenting two means of achieving that loftier standing. Insurance companies can either “divest themselves of holdings in fast food companies as well as other industries that have a clearly negative health impact,” they suggest, or they can use their ownership as leverage to force fast-food chains to adopt “practices consistent with widely accepted public healthy principles.”

The researchers concede that there are a few logical explanations for why health insurance providers might hold fast-food stock—to offset financial liability “associated with their policyholders consuming fast food,” due to a lack of understanding of the potential negative public health impact of excessive fast food consumption, or even simply due to a lack of communication between departments. Yet none of these explanations let the insurers of the hook, they argue. “If insurers are to play a greater part in the health care delivery system they ought to be held to a higher standard of corporate responsibility,” they write. “This responsibility includes aligning all o their resources—including financial investments—in ways that improve health or, at the very least, do not harm it.”

This is an obvious conflict of interest.  It is also another reason health premiums are so expensive.  The health insurance industry is helping fund the very industry that is making people sick!  It’s outrageous.

These are the very same companies that will charge higher premiums if you gain weight or cancel your policy if you cost them too much money.

Just the other day I had a patient come in and tell me she had been dropped by her insurance company because she had “reached her lifetime cap” in terms of spending.  That cap by the way was $1 million.  This was and continues to be a very sick woman, but the insurance company does not care.  All they know is that she is costing them too much money.

Apparently these insurance companies see nothing wrong with investing in fast food though.  Why don’t they invest in tobacco companies too?  There really is no difference.  A lifetime of smoking is not any worse for you than a lifetime of eating fast food.

There are plenty of other ways to invest the large amounts of money that insurance companies make every year.  Investing that money in fast food companies only makes your premiums higher.  It’s like the local police force supplying the drug dealers with cash. It makes absolutely no sense whatsoever.

The insurance company will be the first to raise your premiums for eating at fast food chains.  Of course they don’t know when you actually eat there, but they do require you to have regular physicals.  If your cholesterol goes up, if your weight increases or any other health marker changes negatively, you can expect an increase in the amount of money you pay them.  They’ll turn around and invest that money back into the very problem that is plaguing society.

Fast food companies will say that their food can be eaten as part of a healthy diet. I do not agree and their marketing is designed to get you to eat at their chain as often as possible.  They’d like nothing more than for you to eat every meal at their restaurant.  However, doing this is extremely detrimental to your health.

Obesity costs this country billions each year.  The insurance companies make billions off high premiums and denying care at every turn possible.  With their profits they invest irresponsibly in companies that are playing a significant roll in the  high cost of health care in this country.  In my opinion this should be illegal.

They have the right to invest their money, don’t get me wrong.  They should be investing it in areas that improve health, not destroy it.

Here is a short video from http://www.cnn.com that everyone should watch.  This is partly to blame for why health care is so expensive.

This piece by CNN really illustrates the problem with American health care.  In this piece they say that as long as the bill isn’t over $100,000 they just pay it.  Firstly, that isn’t true.  Being in the health care field I know how insurance companies can nickel and dime doctors to death.  Secondly, if it is true, then these insurance companies must be making exorbitant amounts of money.  They’d have to be to consider paying anything less than $100,000 without looking at the actual bill!

While some of these mistakes might be honest errors, I find it very hard to believe.  I have a personal experience with this as well.  My grandfather was in the hospital for an extended time and was also charged more than $120 for a single Tylenol.  It always amazes me that this doesn’t get more attention and that the hospitals don’t get into more trouble for their billing practices.

The insurance companies are being irresponsible with your money, which in turn, costs you more money.  The fact that they simply pay these amounts without actually looking at the bills from the hospital drives up your premium cost.  Is it any wonder that it cost almost $17,000 to insure a family of 4 in 2009. Think the cost of health insurance is not affected by such wasteful spending by managed care firms?  Check out the statistics.

From 2005 to 2009 it costs an extra $379 per month per family.  Many families don’t have that laying around to spend.  As it is, they are already spending $1400 per month on health insurance.  This is only part of the problem, however.

Insurance costs would decrease significantly if people became healthier in this country.  We need to teach people how to eat better and exercise.  This would significantly reduce the burden on the health industry resulting is lower costs overall.  Diets focusing on healthy fats and protein with less emphasis on grain and carbohydrate is the only way to achieve this.  Anything else, such as the low fat paradigm, will only make the problem worse.